Home › Show and Tell: Say Hello and Show Us What You Fly 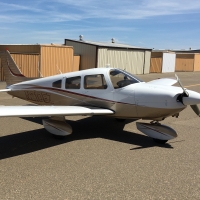 Ray McNaught
August 2019 in Show and Tell: Say Hello and Show Us What You Fly

I found this site a short while back and figured it was time to say hi!

Got my PPL in mid 80's and flew for a few years until life happened and I began to rust!

In Dec. 2017 I got the bug and decided to see if flying was something I could pick up again after 30 plus years! I went to an AOPA Rusty Pilot Seminar, did a bunch of studying and scheduled a Flight Review... two hours of ground and a little over 3 hours (3 flights) later I got signed off!

The FBO I got the BFR at was not very pilot-friendly and only had two really beat Cherokee 140's, so I found another FBO about a 30 minute farther drive that had 5 Pipers: Warrior II, Cherokee 180, Archer II, and 2 Arrow II's. A couple hours in the Arrow got me checked out in all of their piper fleet. Not only do they have much nicer looking aircraft but they appear to be much better maintained also!

Fast forward to early April 2019. While looking around the web one evening I stumbled across a '78 Piper Archer II for sale at a nearby airport and decided to take a look at it. The archer looked pretty good in the pictures but in person, it looked great! Long story short it flew me to my home airport by the month's end.

I plan to update:
The transponder/ ADS-B
A pair of G-5's, ditch the suck pump!
Change one mag to a SureFly electronic
New ELT that transmits on 406 MHz and 121.5 MHz
New audio panel and a pair of nav/coms Or one nav/com and a GPS Nav/com (navigator)

I also need to find out why the electric pitch trim quit working... anybody know where the pitch trim actuator/motor is located in an Archer II? I'm hoping it's something simple like motor brushes needing to be cleaned or such!